During this week we had a number of things to mark 100 years since the signing of the armistice which led to the end of World War 1.  Our Art department worked on a display and towards the end of the week the library showed a film ‘They Shall Not Grow Old” which has recently been released.  The former pupils also prepared a really good display showing how WW1 impacted on the school and its pupils.  Through the week a group of pupils also led assemblies to highlight the human sacrifices made during WW1.  It is important that we help pupils think about such issues in the hope that we can learn the lessons from history to avoid such horrors in the future.

We took the opportunity to link in the 3 ‘values’ which inform so much of the school (Respect People, Respect Learning and Respect Community) in particular Respect Community.  On the subject of our Community I want to acknowledge the fact that Sunday marked 100 years since Poland achieved independence.  We have a good many Polish families at the school and we also host the Polish School at Harlaw every Saturday.  I am sure Sunday will have been a day of special celebration for all our Polish families.

I am proud of all that is done in Harlaw Academy to help our young people to play an active role in their community.  The way in which the Former Pupil display links the school of 1918 to the school of today has significant impact.

During the week there were several other things which demonstrated a school serving its community and a community supporting its school.  Three of these included;

As we move into late Autumn and winter we have asked our pupils to be respectful to the community.  Darker nights can bring concerns around road safety and as we begin to see snow there will no doubt a temptation to throw snowballs.  People have to show consideration towards others and recognise when things move beyond being acceptable and begin to show a lack of respect for the wider community.  I am almost sure I will be speaking to pupils about “Respect Community” more in the next few months but I want to finish this post with the message we gave to the young people in the assemblies.  Over the last two weeks I have had 4 people independently seek me out to say how impressed by our pupils – two were visitors to the school and two work in the town centre and encounter our pupils at lunchtime.  It was fantastic to be able to give the pupils positive feedback and to ask them to keep doing all they can to Respect their Community.   I leave you with a few pictures of the FPs display: 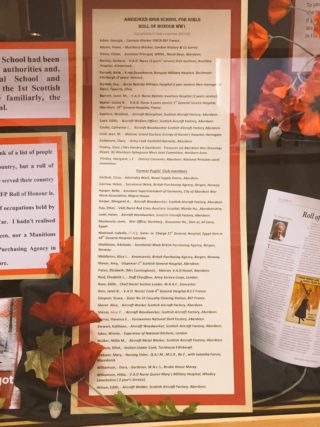