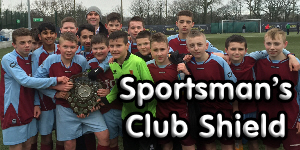 The Sportsman’s Club shield was first played for in 1975 – that year it was won by Hazlehead Academy.  At the time Hazlehead had a great S2 team which included Neil Cooper who went on to win a Cup Winners Cup medal and numerous other trophies with Aberdeen, Rangers and Scotland.

Over its 50 year history it has only once before been won by Harlaw Academy – in 1983.  David Robertson, who went on to play for Aberdeen, Rangers and Scotland played in that particular Harlaw team.

It has taken 32 years to bring it back to Harlaw – so this is a major achievement.  Hopefully this insight into the history of the trophy is an inspiration to the boys who played in the 2015 team which beat Oldmachar 5-0 in the final.  Maybe one or more of this squad can follow in the footsteps of the local legends named above.

15 minutes into game Ewan Reid ran in from the right onto a through ball from Kyle Koss.  He took one touch before hitting a fierce shot over the keeper and into the far corner of the net. (1-0 Harlaw)

44 minutes Zane Islane held up a through ball, he played a neat 1-2 with Keiran Jamieson before slipping the ball under the advancing Oldmachar keeper (3-0 Harlaw)

50 minutes Ewan Reid played ball through to Liam Mewes on the right wing.  Mewes rounded two defenders before releasing a shot which was well saved by the keeper.  As the ball broke free Zane Islane was on hand to tap it into the net.  (4-0 Harlaw).  Zane was then substituted by Dylan Dalgleish.

55 minutes Mohamed Shafik was substituted by Bartek Malinowski and Ewan Reid went back into defence.  Keiran Jamieson rounded the Oldmachar defence and delivered a dangerous cross which was met by Saiyed Ahmed.  His header went narrowly over the bar.

65 minutes a long free kick from Oldmachar was brilliantly saved by Harlaw keeper Dawid Zdunczyk.  From the resulting corner Oldmachar came very close but as Ewan Gordon cleared off the line the official signalled for offside.

70 minutes in the last attack of the game Liam Mewes had a strong run down the right taking on 2 defenders.  He ran in towards the near post before slipping the ball across the goal for Dylan Dalgleish to score from close range (5-0 Harlaw).

Harlaw captain Morgan Bruce was presented with the trophy at full time. Bartek Malinowski on for Muhamed Shafik after 60 minutes

Devan Harman on for Kyle Koss after 65 minutes

In squad but not fit/stripped: